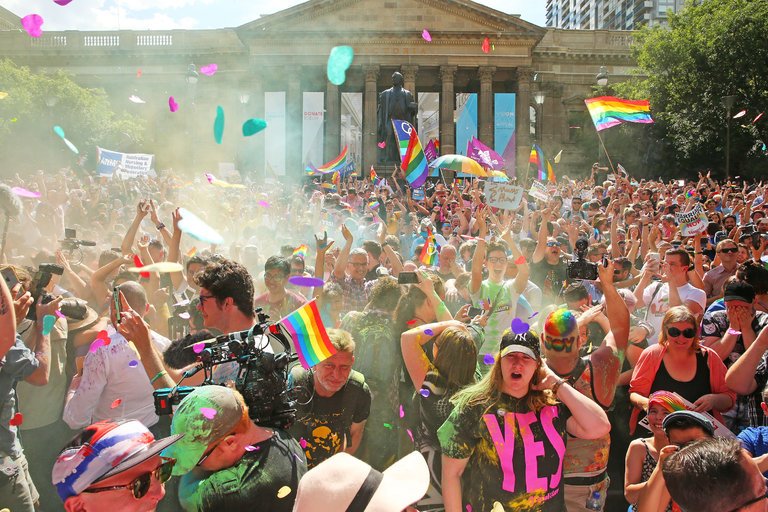 Last week, the Australian people’s vote on same-sex marriage was revealed. Of the 12.7 million Australians who took part in the government survey, 61.6% (just under 8 million) voted in in favour of SSM while 38.4% (just under 5 million) voted against. In short, the nation was given an opportunity to make its voice heard and it did so with a rallying cry. So what will change, what does it mean and how should we respond?

Section 51 of the Constitution stipulates the powers of the federal Parliament. One of those powers is the ability to legislate with respect to marriage:

Section 51 Legislative Powers of the Parliament

The Parliament shall, subject to this Constitution, have power to make laws for peace, order, and good government of the Commonwealth with respect to: (xxi) marriage;

The Constitution was written in the 1890’s yet a definition of marriage was not included. It was universally assumed at the time that marriage was between one man and one woman. It wasn’t until 1961 in fact, that federal legislation was created. Before 1961 each state had their own regulating laws for marriage.

Now, this may just freak you out a little bit but in 1942 Tasmania raised the minimum age of marriage from 12 to16 for girls and 14 to 18 for boys. Yeah, that’s right under eighty years ago a 14-year-old boy could marry a 12-year-old girl. The differing State legislation led to complications, as recognised marriages from one state were not recognised in another. Therefore the federal Marriage Act of 1961 was instituted. However again at this time, a definition of marriage was not inserted into this act. It was still assumed that marriage was between one man and one woman. It wasn’t until 2004 that an amendment of the Marriage Amendment Act under the Howard government occurred defining marriage as seen below.

As it currently stands, marriage is defined within the constitution as:

marriage means the union of a man and a woman to the exclusion of all others, voluntarily entered into for life.

The Federal Government promised it would introduce legislative changes to allow same-sex couples to marry if the nation voted for it. Therefore we can expect this in the very near future. A simple change will occur by removing “a man and a woman” and replacing them with “two people”.

This debate has been framed under the idioms of equality, freedom and love. Yet there is a gradual shift in the definition of these terms. For example, the left has promised that no one else’s freedom would be affected by the legislative changes. However, the current proposed bill put together by Senator Dean Smith (Smith Bill – https://goo.gl/f33foA) only provides religious protections in allowing members of the clergy to refuse to solemnize marriages that conflict with their beliefs. While this is a good start, Lyle Shelton, a Christian lobbyist, has strongly sought to highlight the inadequacy of the bill and his concerns regarding freedom of speech and freedom of religion. Senator James Paterson has proposed an alternate bill that in his view would allow same-sex couples to marry while “preserving the freddoms of all Australians (Paterson Bill – https://goo.gl/9WT8yM).

It raises the question as to how freedom will be defined in our culture and more importantly whether it will be consistent? Will Christian and Muslim schools have the freedom to teach their view of marriage? Will parents have the freedom to remove their children from classes that conflict with their values? Will business owners, such as photographers, bakers and florists have the freedom to refuse service to same-sex couples, without facing legal action as has been seen in the United States?

Additionally, what is determined as discriminatory behaviour? Australia already has anti-discrimination legislation in place and these set out the definition of discriminatory behavior (see https://goo.gl/TCLv5M). Yet there remains a significant tension between protecting the rights of a person to freely practice their religion and have the freedom of speech and that of permitting a person to engage in discriminatory conduct. This is equally as important to protect, particularly for minorities that are far more vulnerable to such conduct.

So how will we define these human rights and protect the equal and inviolable rights of all members of the human family?

WHAT DOES IT MEAN?

It means we’re not in Kansas anymore. Nor have we been for quite some time. As a nation, we do not have a grand narrative guiding and leading us to the same destination. This is just the reality. The age of consensus is dead and gone. The age of a moral majority for Christians and the church is over. Australia is a post-Christian nation, a secular nation, and we need to adjust our expectations accordingly. There is a myriad of worldviews within our culture, Christianity is but one, and it no longer has the monopoly. And biblically and historically this has been the norm. The naivety and ignorance of the Christian West are often astounding. Have we forgotten the history of God’s people in exile? Have we not learnt from Daniel, Acts and 1 Peter where God’s people did more than live in a hostile culture in exile, they shone brighter in it? Are we unaware of God’s people in places like China, Sudan and Syria? Most Christians do not exist in the comfortable west, they live in hostile environments under great persecution and yet God and the Gospel continue to advance. In fact, in my estimation, Christianity excels in the margins.

It means the divide is rapidly increasing. This referendum has demonstrated the deep rifts within our culture. The chasm between the left and the right, liberals and conservatives is growing. And what’s left in the middle is confusion and disorientation. As the divide increases love for the other decreases. Additionally, there is an increasing divide between professing Christians and practicing Christians. While 50% of Australians may have ticked, “Christian” on the latest census, the reality is many of these, if not most, are simply theists, or more accurately, agnostic. In fact, the media are quick to inform us that Christianity is dying a slow death in this country. They will point to this latest vote as evidence of that. But the reality is we are seeing a decline in “nominal Christianity”. More and more people raised Catholic or Anglican, are feeling the freedom to acknowledge that they don’t truly believe or practice. A deeper study of the analytics, with clear specifications with regard to genuine Christian practice, tells us that Christianity is not decreasing, rather nominal Christianity is. And this is a good thing. Not because we don’t want to be associated with non-believers, rather it is the opposite. The Roman world was not turned upside down in the first century by nominal Christians. It was turned upside down by genuine believers and followers of Jesus willing to risk it all for the sake of the gospel and to love their neighbour even at great personal cost.

HOW DO WE RESPOND?

With the world around us changing, nothing changes for the Christian. We remain called to love God and neighbour as a response to God’s grace, mercy and love towards us. We have an incredible opportunity to model Christian love to heterosexuals and homosexuals, liberals and conservatives and the like. Our God is the same he never changes. Our mission is the same it never changes. We are to make disciples of Jesus proclaiming the truth of the gospel, courageously yet with gentleness and respect.

“He had told you, O man, what is good; and what does the Lord require of you but to do justice, and to love kindness, and to walk humbly with your God”

“But seek the welfare of the city where I have sent you into exile, and pray to the LORD on its behalf, for in its welfare you will find your welfare.”

How do we respond? By continuing to love God and our neighbour.